The Fed Decision is behind us and just when we thought that maybe we could enjoy a week free from extreme volatility, we have BREXIT this week. The vote regarding the European Union is on Thursday, and that could give us another week of volatility.  That said, by using Cycle analysis and Technical analysis, we have been expecting a certain outcome and things do seem to be lining up as anticipated.  Lets do a review.

SPX- We may have seen a 1/2 cycle low. This would lean more to the bullish side indicating that the current consolidation is building steam to attempt a break out. This looks like a 'W' pattern with a handle. 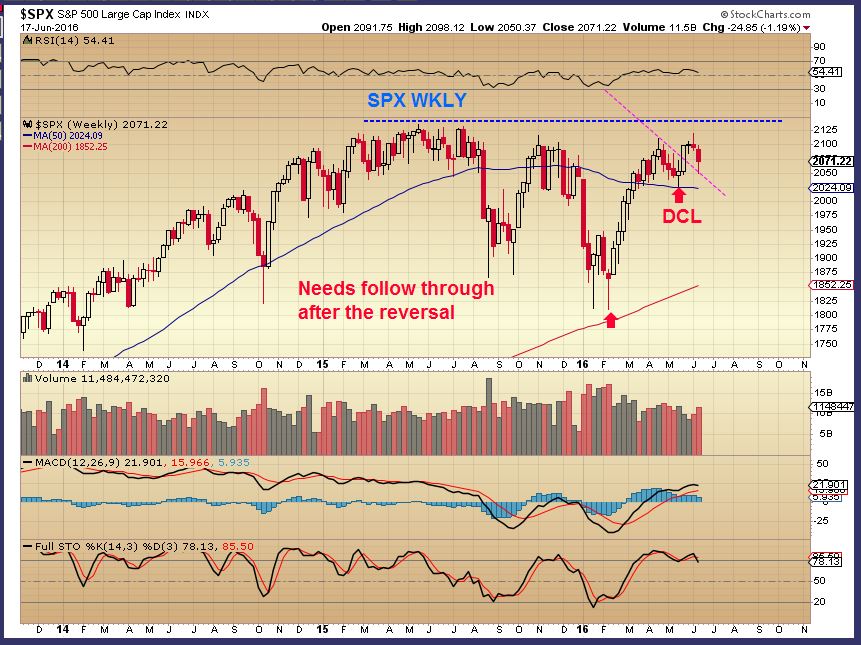 The W-Pattern is a bullish pattern mentioned in William O'Neil's Books. This one ran to $800, and is currently at $1800. 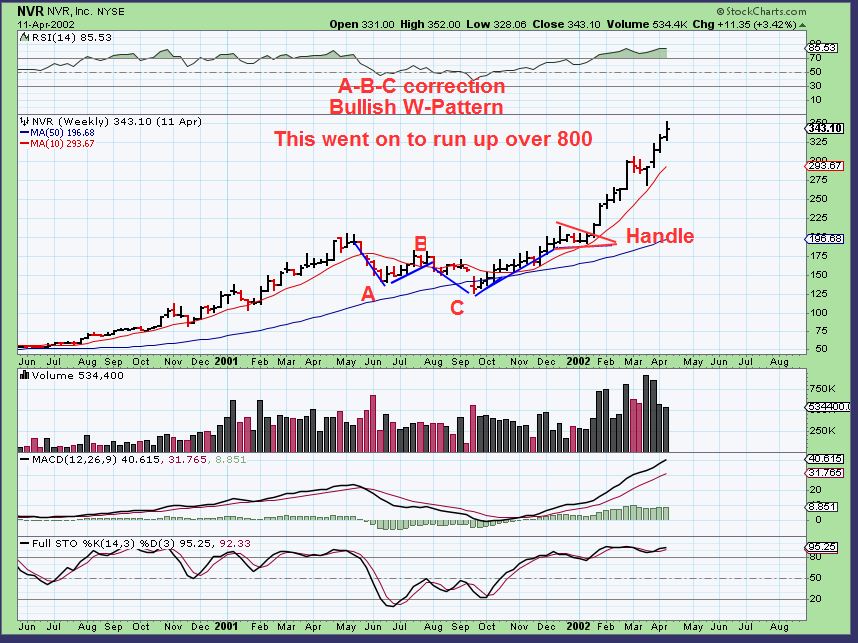 That is not the only Bullish chart on our Brexit Week, there are more ...

When a climber begins his or her ascent, they are full of energy and the start of the climb is always easier than when they near the peak. As the climb continues, you may see him or her periodically rest, shake out the tightness,  even drop back and pursue a different path to the top.  I often see that same thing happen in the climb of various stock market sectors, and Precious Metals and the Oil sector is experiencing that now. (Long term they remain bullish in my opinion), WTIC - This was June 14 and we were on day 50 of a Cycle, so it was already late in crude oil's daily cycle and I was expecting a low soon. 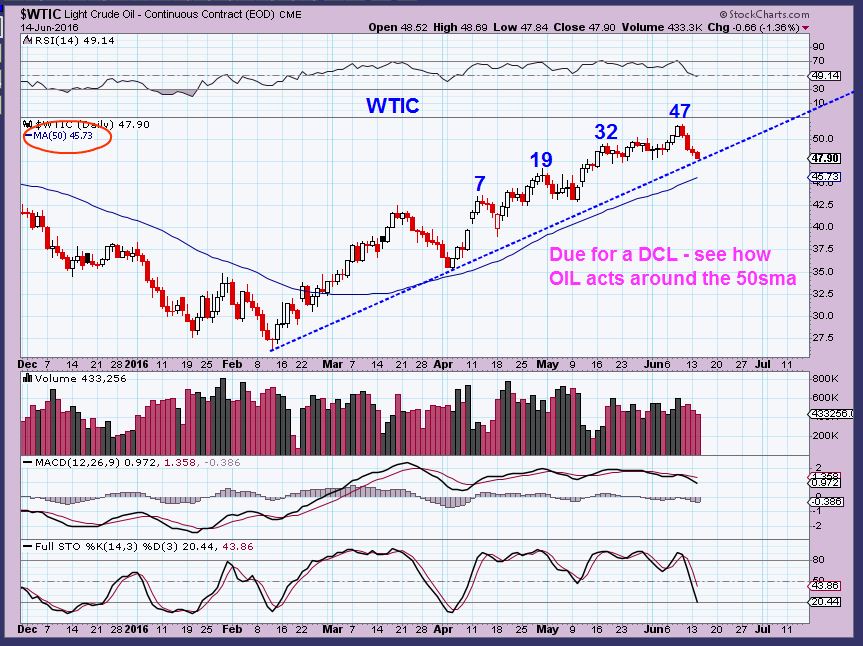 When a climber begins his or her ascent, they are full of energy and the start of the climb may be easier than when they near the peak. As the climb continues, you may see him or her periodically rest, shake out the tightness,  even drop back and pursue a different path to the top.  I often see that same thing happen in the climb of various stock market sectors, and Precious Metals and the Oil sector is experiencing that now. They remains bullish long term in my opinion. We will discuss that briefly, but first...

SPX - SPX put in a reversal on Thursday just as it started to lose the 50sma. We'll see if there is any follow through to its recovery today. 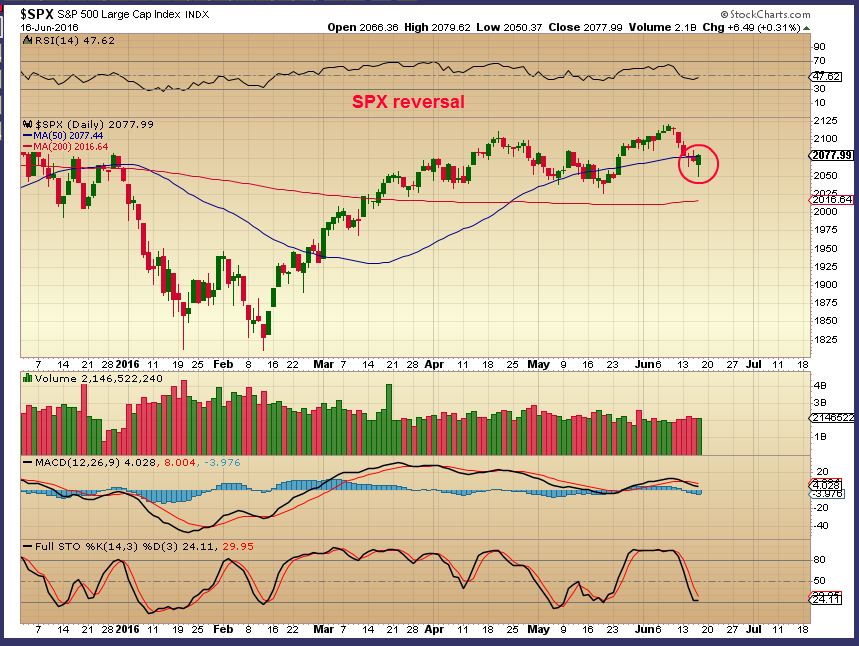 That's what I heard from the Fed.

SPX - This needs to move higher soon. It is starting to show internal signs of weakness, even though it doesn't look like much of a pullback. The VIX looks like a bull flag may be forming. 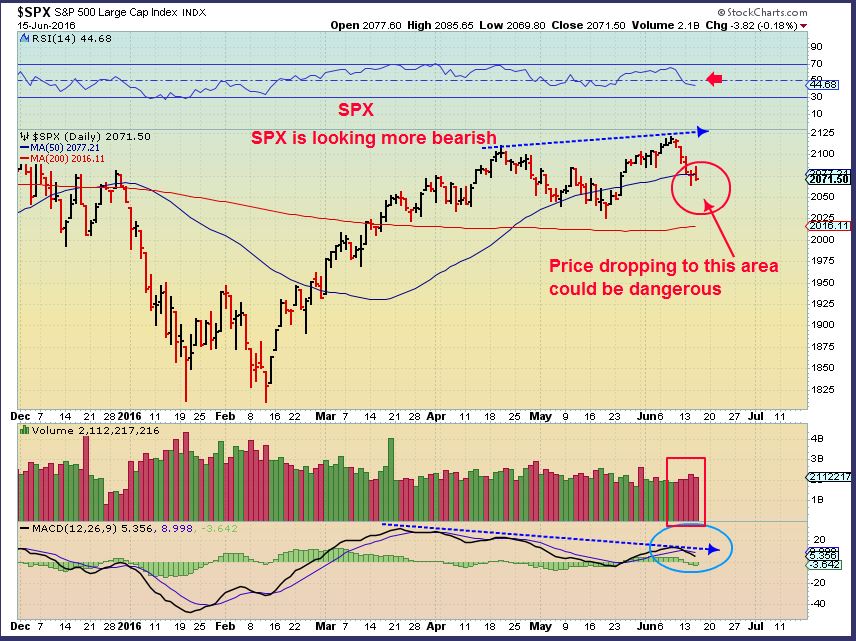 This was my thinking from yesterdays report... 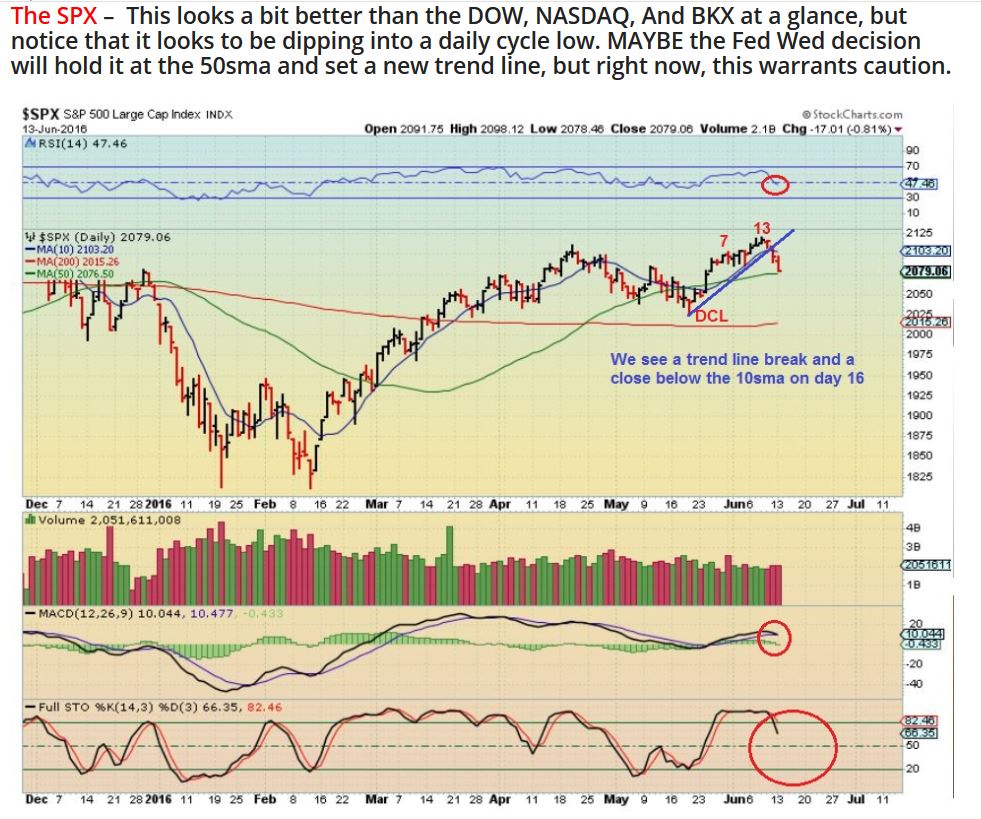 This is how Tuesday ended. We lost and regained the 50sma and today is Fed Wednesday. Will the 50sma hold or will this drop to the 200sma? Lets look at 2 more things. 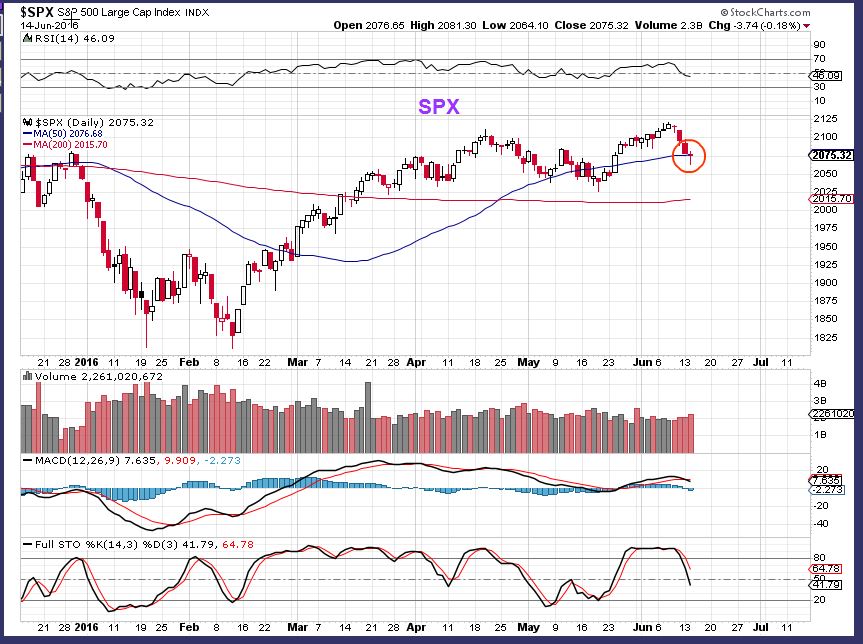 Monday we saw a little more selling in the general markets as we approach the Fed meeting Wednesday. I have been bullish for a possible break out to new highs,  but recent action is less bullish and it may be that we wont know for sure until after Fed Wednesday. Tuesday may also be a little bit boring ahead of the Fed.

The SPX -  This looks a bit better than the DOW, NASDAQ, And BKX at a glance, but notice that it looks to be dipping into a daily cycle low. MAYBE the Fed Wed decision will hold it at the 50sma and set a new trend line, but right now, this warrants caution. 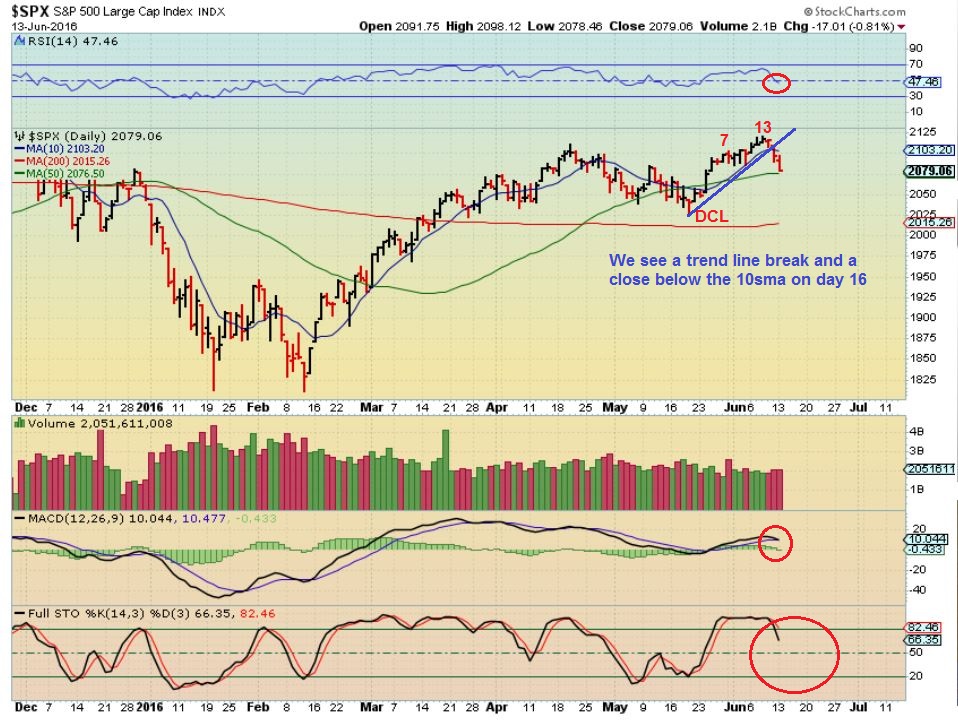 The NASDAQ  is a tad weaker 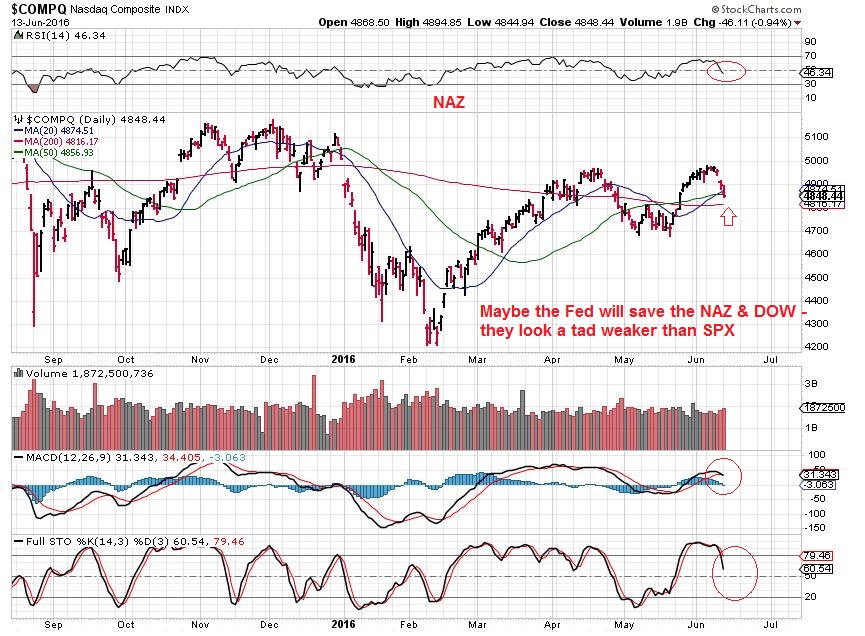 After we review the general markets, Oil, the CRB, etc, this weekend report will focus mainly on Gold, Silver, and Miners. To the charts...

SPX - This is a Fed Week, so I am watching the markets very closely at this critical area. This is rather early in the daily cycle, and if this is "the Peak', it will likely be left translated. We saw a slight break to new highs and then it gave them up. On day 15, I'll we watching this closely going into the Fed mtg. 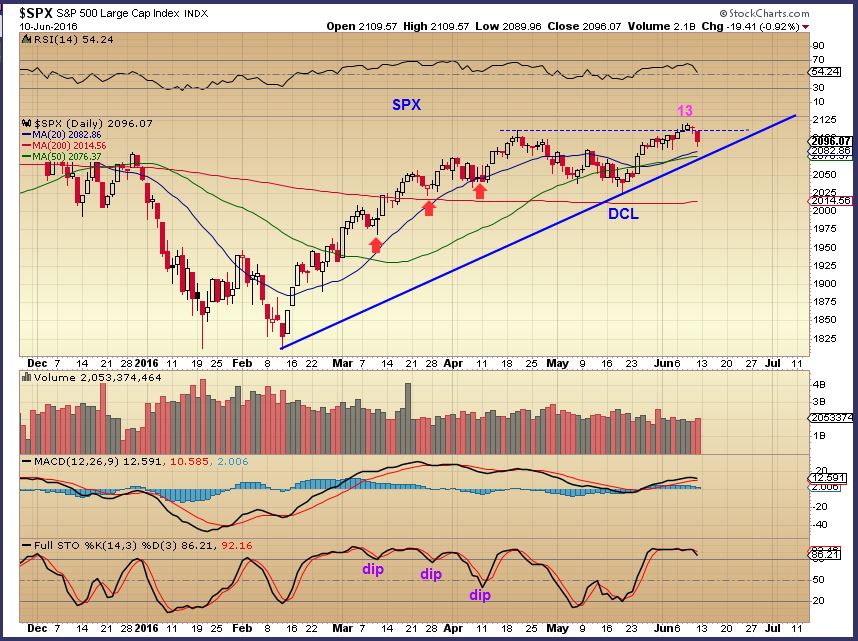 You may have heard that you should not buy precious metals miners until after a ‘blood bath phase’.  I mentioned within my (premium May 18) report that I have received numerous emails telling me that warnings were out that the next Intermediate Term Cycle Low (ICL – A cycle low that occur every 5-6 months) will not come until we first see a huge sell off within precious metals.  Many fear that the blood-bath is still directly ahead, and some think it will occur around the Brexit vote (June 23rd).

Today, I would like to share with you just a brief excerpt on what I’m looking at here within the precious metals sector.  And within my coming weekend member report, I will be going into much more detail on what one should expect in the coming months.

Below is a chart that shows what happened coming out of the 2008 lows, when many were also looking for a an ICL and “blood bath” sell-off.  As you can see, advances out of bear market lows do not follow the typical script.  Simply put, there was no blood-bath to be found around six months after the Oct 2008 lows…it occurred almost one year later. 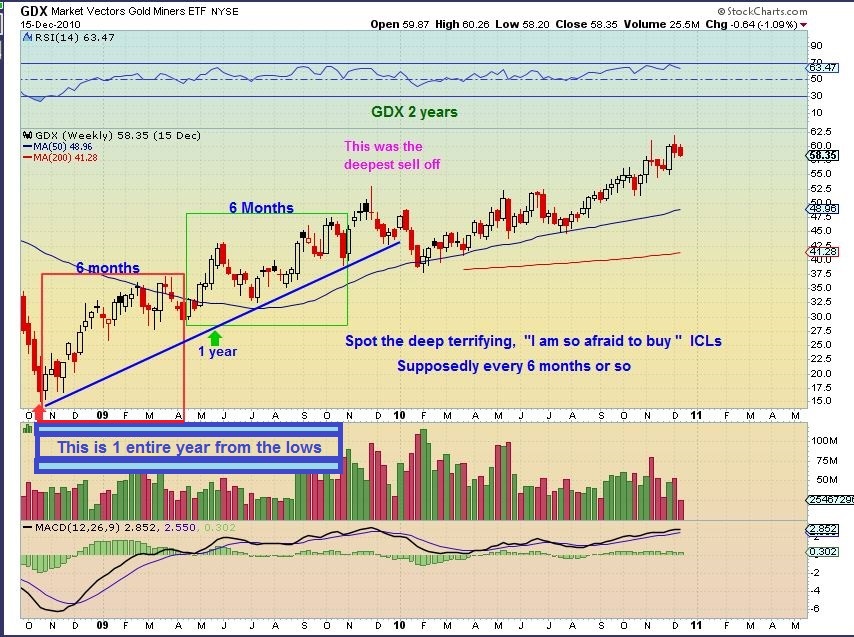 Actually, for the past two weeks, I have been saying that we could be at or past the next important low in the precious metals sector. Last weekend’s report discussed this idea further, and this weekend, I will include more research on that theme.

I also mentioned that a gold break above the overhead down trend line would give further evidence that we saw an ICL, without a blood-bath phase. This was gold on June 9th. 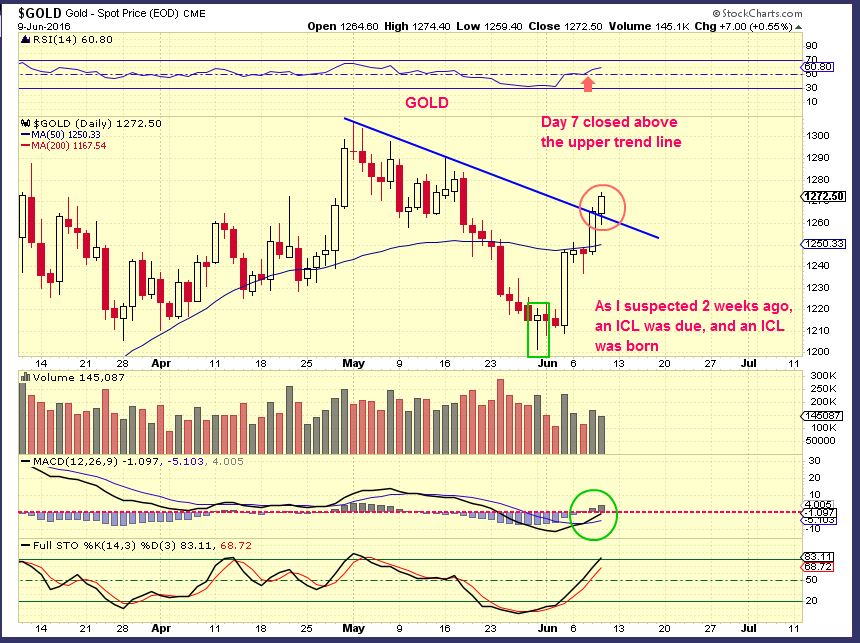 USD – The USD was in decline, but due for a Daily Cycle low (DCL) this week.  On Thursday, the USD took back three days of losses, but Gold and Silver moved higher despite this strength. We have seen a change of character here, where the dollar can rise and gold manage to resist the expect drop in response.  See also Feb 2016 on this chart. 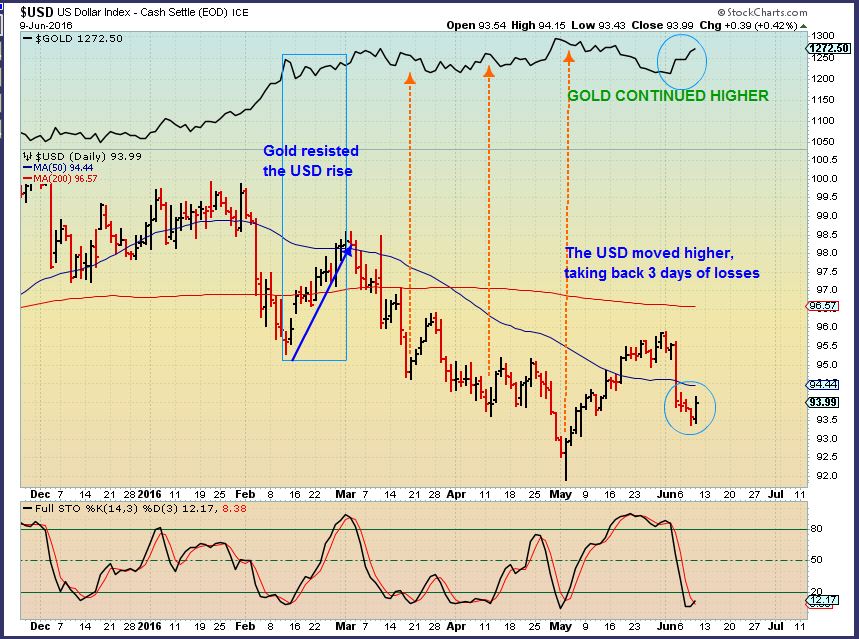 It will never be a straight run higher with precious metals, it takes discipline and patience.  However, gold bull markets are known to surprise and have the ability to leave so many people behind.  With this weekend’s report, I will outline what I believe is occurring today and will cover what members could expect going forward.

Chart Freak members receive up to 5 premium reports per week covering a wide array of markets, as this public post illustrates.  Come and join the ChartFreak community as we trade the new Gold Bull Market and various trending sectors.

You may have heard that you should not buy miners until after a 'blood bath phase'. As mentioned in my May 18 report, I have received emails telling me that warnings are out that the next ICL ( meaningful cycle lows that occur roughly every 5-6 months) will NOT come until we first see a huge sell off.  Many think that will happen around Brexit ( June 23rd).

I used this chart to show what happened coming out of the 2008 lows, when we looked for our 2nd ICL. I do NOT see a deep bloodbath phase 6 months after Oct 2008 lows. I see higher lows for 1 year, so that is noteworthy.

Actually, for 2 weeks I have been saying that we could be at the next important low in the precious metals sector. Last weekends report discussed this idea further and this weekend will include more research in that area .

The trading has been good for the past few weeks and as time goes by, we are seeing many things coming together as expected.  By the time we get to the weekend report, pieces should fall into place and give us a clearer big picture too.  Lets review some of the recent action and how it has been playing out.

DJUSST WKLY - I posted charts of STEEL in May and June and expected another run higher. Steel stocks should benefit. 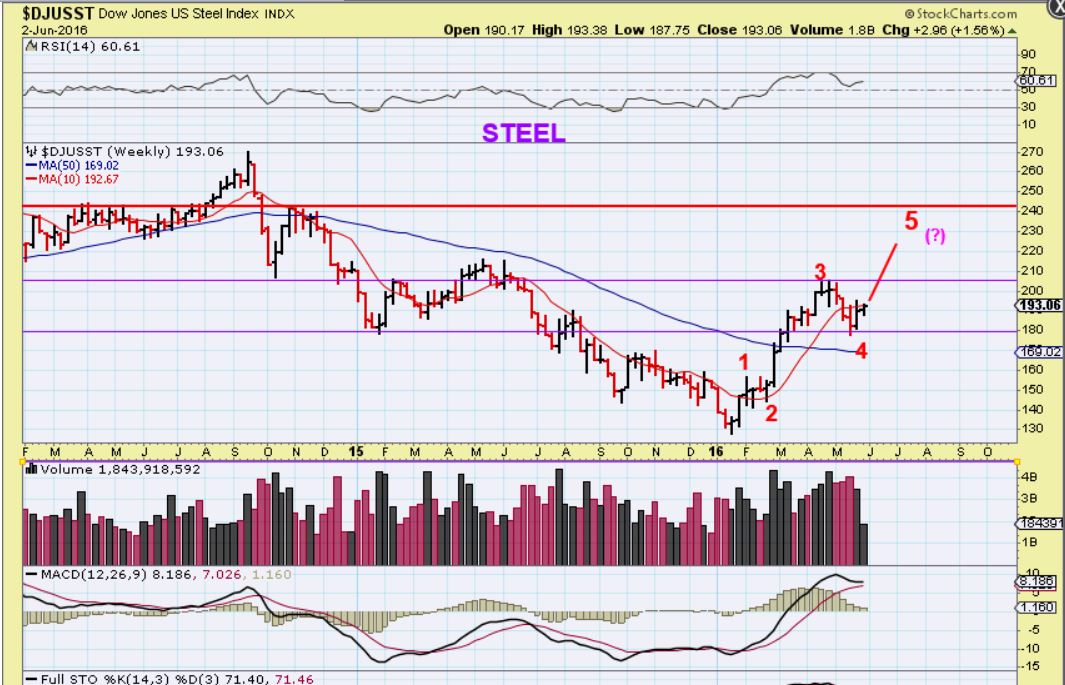 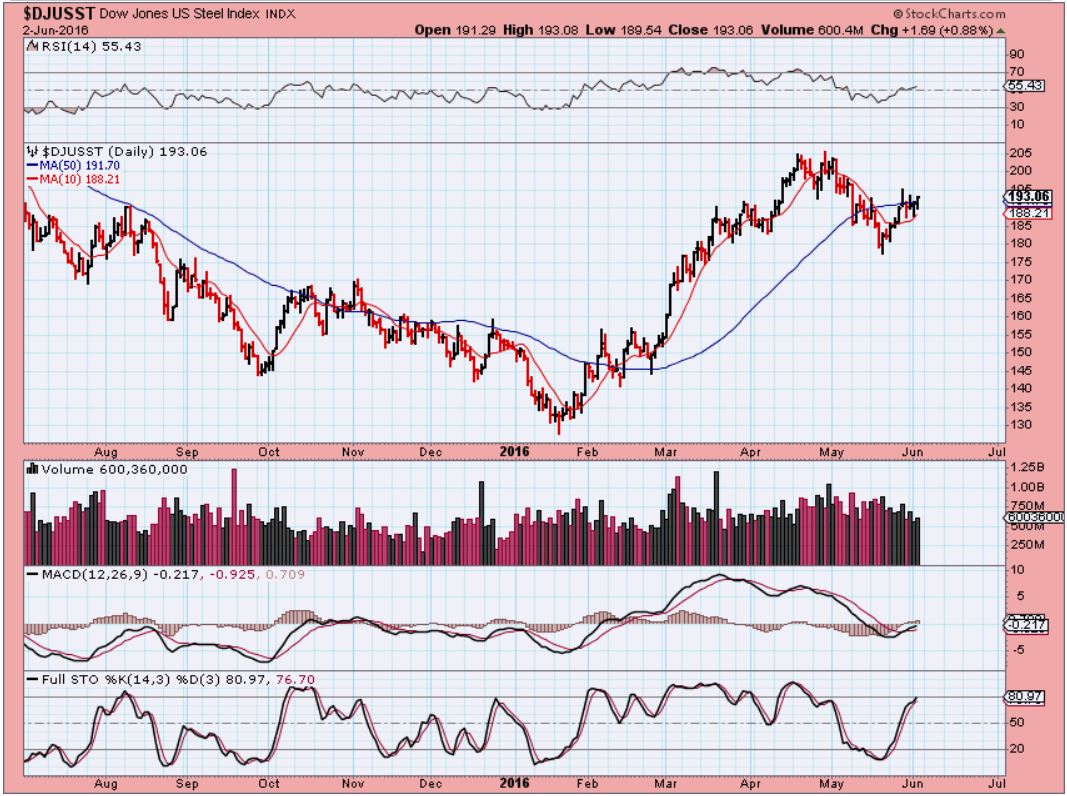 STEEL JUNE 8th - One week later and Steel is breaking out.  Steel stocks like STLD, AKS, X, etc have started running again too. 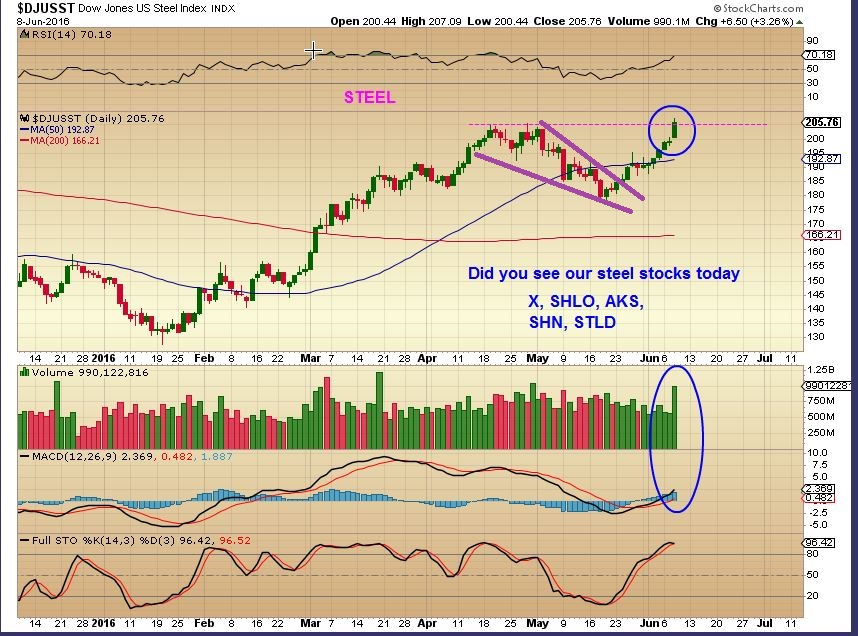 Notice how Steel broke above the 50sma, stalled and then took off higher? Then take a look at this...

My name is Robert Alexander, but I’m probably better known as ‘Alex’ in trading forums. I’ve been a full time trader for around a decade and began trading in the late 1990s while working in management and sales at a well-known aerospace ...